Writer and producer of marketing materials for Fortune 100 companies and entertainment campaigns including Verizon Wireless, The Latin Grammy Awards, Puddle of Mudd, Alejandro Sanz, and Nissan

Script developer and coordinator for Black Entertainment Television
A Spoonful of Black Widow - a comedy novel.  Currently available on Amazon

Instructor of Meisner, Chekhov, and Improv:

Faces - Expressive portraits of the perceived presentation of the female figurative - often insubstantial and vapid yet focused and tenacious and sometimes with defiance, always with a little bit of off and much-needed humor.  Usually influenced by the love of literature, the performing arts, and costume design. Her characters are painted freehand. Gallery
﻿

Kerry's comedy novel A Spoonful of Black Widow is available on Amazon. 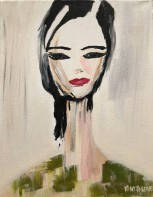 Kerry's piece It's Her was shown at Blue Line Arts Gallery. 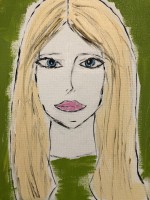